Bruce Springsteen have played covers on 1667 out of 2715 shows, with a probability of 61.4% to listen a cover on their shows 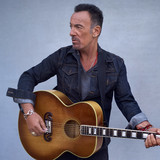 Biography
Bruce Frederick Joseph Springsteen (born September 23, 1949 in Freehold, New Jersey, United States) is an American songwriter, singer, and guitarist. With a recording career stretching back to 1966 that continues to this day, he's recorded multiple award-winning studio albums and toured constantly, inspiring generations of pop and rock musicians. He's often known as "The Boss". He has frequently played as Bruce Springsteen & The E Street Band. Most widely known for his brand of heartland rock infused with pop hooks