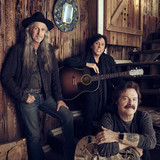 Biography
The Doobie Brothers are an American rock group, best known for hit singles like Black Water, China Grove, Listen to the Music, Long Train Runnin', and What a Fool Believes. They have sold over 22 million albums in the United States from the 1970s to the present. The Doobie Brothers were inducted into The Vocal Group Hall of Fame in 2004. In 1969, singer, guitarist and songwriter Tom Johnston and drummer John Hartman formed the nucleus of what would become The Doobie Brothers.