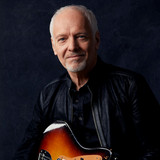 Begin
1950
Country
United Kingdom
Biography
Peter Frampton (born 22 April 1950 in Beckenham, Kent) is a British musician, best known today for his multi-platinum selling solo work in the mid-70s when he was an "arena rocker". He originally became famous, however, as a young member of psychedelic era band The Herd and became a teen idol in Britain. Steve Marriott reportedly wanted to bring the 18-year-old Frampton into the Small Faces lineup but ended up starting Humble Pie with Frampton instead.
MusicBrainz
638206ee-0e3d-47cf-9769-d73330b15a87
Spotify
0543y7yrvny4KymoaneT4W

Number of concerts on this tour

Peter Frampton has a probability of 29.17% to play an encore on tour 2017 Summer Tour