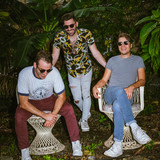 Begin
2022
Biography
The Magic City Hippies began as a one-man band playing for the co-ed party scene on the streets of Miami -- serenading the 20-somethings with a mix of old-school hip-hop covers and original tunes. After months of stealing electricity and stirring up crowds of passers-by with his loop-based setup, frontman Robby Hunter was asked by the Coconut Grove Police to cease and desist or 'play in a real bar.' Finding sanctuary in a nearby dive bar, Robby enlisted the support of multi-instrumentalists Pat Howard and John Coughlin for a regular gig.
MusicBrainz
36b4fc35-165a-48fa-9897-dd83eecc01d9
Spotify
1ikg4sypcURm8Vy5GP68xb