Decapitated have played covers on 8 out of 1201 shows, with a probability of 0.67% to listen a cover on their shows 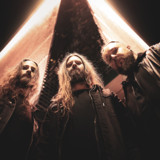 Biography
Decapitated is a technical death metal band from Poland. They formed in 1996 in Krosno in southern Poland, when all the members were still attending music school. They released their first demo Cemeterial Gardens in 1997 and their second demo, The Eye of Horus in 1998. After these releases, the band was considered as genuine contenders of the underground metal community, and eventually signed with Wicked World/Earache Records for the release of the debut album, Winds of Creation.

Search between Decapitated concerts with covers